The story of the American Bulldog begins in the mountains of Tibet, where Molossus dogs or Mastiff dogs emerged. They are descended from the great Tibetan wolf, which still exist in northern India and Tibet. Probably the Chinese were the first people to create the true Mastiffs, their literature contains references to large hunting dogs, with short snouts and wide jaws, around 1,121 BC
These dogs were used to hunt dangerous animals like tigers, wild boars or bears. The hallmark of these canine monsters has always been size, relative slowness (compared to Greyhounds and larger Terriers) and exceptional ability to defend themselves. Stone sculptures showed a muscular dog, with short, solid fur, and devoid of excess skin like today’s Molossi.
Compared to today’s English Mastiff, the ancestral moloss was less than half the size and similar in shape to a heavy boned American Pit Bull Terrier. There is no doubt that these dogs were also robust, with well-positioned limbs and without the dysplasia of today’s exhibition Mastiffs.
Alexander “The Great” brought more Mastiffs from India to Greece around 333 BC, Greece was the center of Mastiff breeding for 700 years, until English dogs became predominant. In appearance and perhaps in temperament the dog closest to the Greek Mastiff would be the Swinford Bandog, which is a combination of the athletic Neapolitan Mastiff, English Mastiff and Pitbull. Swinfords have large (not huge), muscular bodies, with solid heads of medium size similar to that of a Pitbull.
Julius Caesar may have found the English Mastiffs when he made his initial attack in England in 55 BC the legend says that he was so impressed by the ferocity of the muscular dogs of war, which were being used by the Celtic tribes, that he brought some of them back with him. Supposedly the Celts raised the dogs and trained them to bite the nose of cavalry horses. Old Bulldogs would hold the horses’ snouts until they started jumping and knocking over their handler. American Bulldogs and modern American Pit Bull Terriers that are able to immobilize a horse in this way weigh between 45 and 100 pounds (1pound equals approximately 0.4536 kilograms).
The ancestral British dogs were probably the same size, and by the standards of the time these dogs were huge. Today they are known by their Latin name “Pugnaces”, and because of their way of attacking it can be said with confidence that the Pugnaces were true Bulldogs, perhaps the first in the world. The Pugnaces were light brown with a black mask or were dark brindles, colors similar to today’s Bull Mastiff, however the Pugnaces were much slimmer. If we could go back in a time machine, people would mistake them for a big Pitbull or a small Bandog.
Some Celtic tribes also created their Pugnaces to hunt wild boar, which was considered a magical animal in ancient Brittany. They were used together with sniffer dogs, as they are prison dogs and not scent dogs. The snifers would have relied on the protection of the Pugnaces against wild boars or bears. Hunting was a mystical and religious experience for the Celts.
Around 300 AD the Romans recognized the superiority of British dogs for use in battles. The emperor established a special officer called a “cynical prosecutor” who served outside Winchester. His job was to find the most robust and aggressive fighting dog in Brittany and send him to Rome.
They embarked on two types of Mastiffs: 1- a lighter dog (well under 100 pounds) to fight in the Coliseum against bulls, wolves and small cats. 2- a heavier dog (around 100 pounds) to fight wolves, big cats and exotic challengers like hyenas. There is evidence that the Romans actually referred to Bulldogs as lighter dogs, and also reports that they were able to break an ox’s neck and were transported in iron cages.
The Romans loved these dogs so much that they gave up importing fighting dogs from Greece, which had been their main source for centuries. This must have been a blow to Greek dog breeders, because the name “Molossus” is derived from a region of northern Greece, called Molossia, whose name comes from a tribe called Molossi. Even today, there are two types of Mastiffs in Italy, which are descended from the first English Pugnaceos: the Neapolitans from 90 to 150 pounds and the Cane Corsos under 100 pounds. Cane corso is still used by Italian farmers as a working Bulldog and must have their ancestors in common with the English Bulldog, American Bulldog and Pitbull.
Several centuries later, the new type of Mastiff arrived on the British coast, brought to Europe by nomads called Alanis, who were expelled from Asia by the Huns. The Alanis roamed Europe and finally settled in what is now called Albania, a region not far from Molossia. Their dogs became known as Alants or Alaunts in England in the middle ages. Alants were described as being white (sometimes with dark spots on the eyes), large head, short snout and were excellent for hunting wild boars. This is the second type of Bulldog to be bred in Brittany. The modern American Bulldog fits the description above perfectly. It is possible that Alant is the most direct ancestor of the American Bulldog, Pitbull, Sour Mug, Spanish Bulldog and Argentine Dogo. There are direct descendants of the Alants alive today who are less well known. In the mountainous regions between Turkey and India there are large white Mastiffs that are still used in battles with bears.

English dogs were subjected to a much higher performance pressure than their European cousins. The selection of the breeding was not done directly by man through ezoognosia as it is today with show dogs, but by a selection of those who best fought with other animals, this selection lasted more than 1,450 years. During this vast period of time, an unbelievable bravery dog appeared – The Olde English Bulldogges.
There were reports that these dogs were able to hold a bull’s lips, even after their guts had been pulled out. Sometimes butchers subjected their Bulldogs to unimaginable levels of cruelty to prove their ability to fight, even cut their limbs while the dog was trapped biting its opponent until its blood was completely drained. A large Bulldog would hold the prey even with the mutilation. Performance Bulldogs and Pitbulls are the most courageous animals to emerge on Earth. There are reports that these dogs are more courageous than lions, because a lion does not normally attack an adult elephant, since a fighting Bulldog would make an attack if ordered, he might not survive, but would die trying.
In the Elizabethan era, some Bulldog lineage became more specialized in battles, being smaller and more agile. When the battle against bulls became more popular, Greyhounds and Terriers were probably added to Bulldogs to increase speed and reduce size. An indication of the Olde English Bulldogges’ superiority was their export to all parts of Europe, although these countries already had their own lineages. Charles V of Spain imported 400 dogs from England to prepare for war against France in 1518. These dogs destroyed French war dogs, and became famous throughout Europe. In 1,588 the Olde English Bulldogges were exported not only to Spain, but to Cuba and Florida, where they were used in aggressive sports. They were the first Bulldogs in America,
There are two reasons for the variety of types found in American Bulldogs: 1- dogs were not only used for battle with bulls, but also in fights with bears, activities that required different sizes and shapes. 2- uniformity in appearance is a modern phenomenon found in show dogs, 150 years ago, before dog shows all breeds showed great variety, dogs were bred for performance, nobody cared about appearance.
Within the Olde English Bulldogge breed this variety was more pronounced in the 16th and 17th centuries because it was at the height of the battle against bears in England, which required larger and more robust dogs, different from those that fought against bulls. So the two strains grew differently at that time. In 1,609 an English playwright mentions “BullDogs” and “BearDogs” as if they were different breeds. The biggest ones, called “BearDogs” were also called “BanDogges” in the century. XVII. BanDogges were described as huge, ugly and fearful. In addition to battles with bears and guard work, they were used in fights with lions, as the English appetite for bloody sports increased. Sometimes they were placed in arenas against a man armed with a spear, without a doubt a good test for the work of guarding this breed.
In 1835 fighting with bulls, bears and other animals was banned in England, with a rapid decline in these strains. As a result, the practice of dog fighting became extremely popular, whose prohibition only occurred at the turn of the 19th century. Supposedly in dog fighting, the Terrier blood would have been necessary to eliminate the Bulldog’s tendency to pick up an object and hold it, which would make dog fighting tedious. In addition, the smaller size increased the resistance and agility of the dogs and made the fights last longer. The most widely used Terrier was the extinct English white terrier and Fox terrier. Bulldogs were crossed with Terriers to make Pitbulls or crossed with Pugs to make “Sour Mugs”, and with that they were becoming extinct in their country of origin. 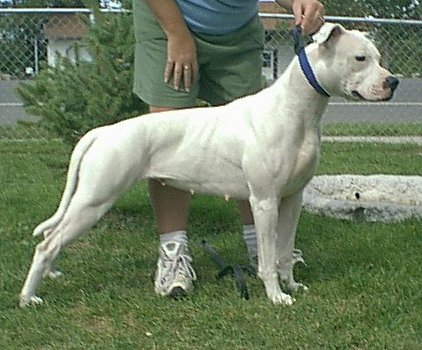 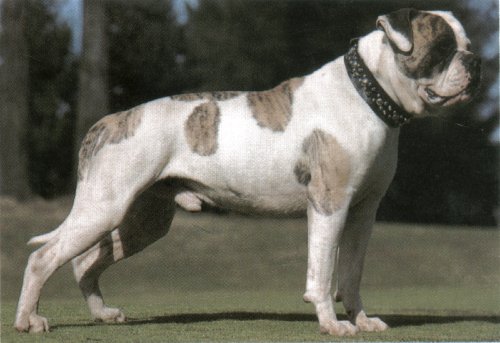 PrevAnteriorDemodectic mange
NextThe (Re) Creation of the “Olde English Bulldogge”Next